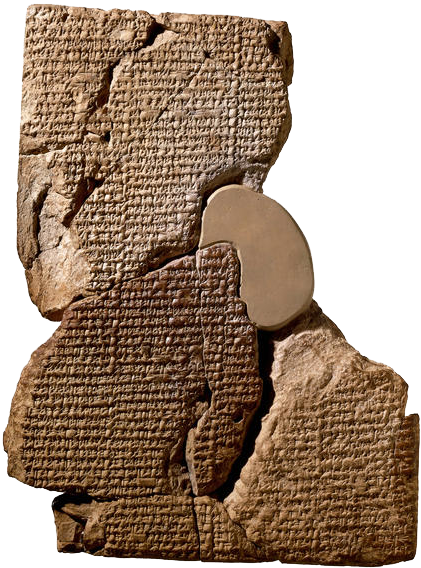 Tablets 2-3 are from Brian Edric Colless’s interesting and eclectic site. It appears here for educational purposes only. I have added a few notes and reformatting. If a note is his it will be labeled [BEC]. The section headings are his.

Atrahasis survives in several tablets from different periods of history. The tablet numbers are from the Old Babylonian version. Has labeled these {BV} . There is also an Assyrian version he draws from which he labels {AV} . Any others are marked explicitly.

The first tablet covered the creation of humanity.
The second tablet describes the problem with humans (they are too noisy). I am glad my parents did not take this approach when I was a teen and my rock band used to practice in the basement! Under Enlil’s insistent leadership they plan to starve them to death. Other gods, particularly Enki and Adad thwart the plans by releasing food and water respectively.
Admitting failure, Enlil reveals his new plan to flood them out, which he implements in tablet 3. But Enki surreptitiously warns Atrahasis to build a boat, which he does and survives the seven day flood. Once on dry land, he offers a sacrifice.
The gods who have been tortured from hunger and thirst, since there were no sacrifices, immediately gather around, and Enlil is compelled to allow the surviving remnant live.